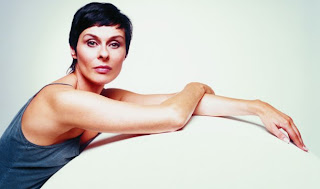 Soul comes in all colors.  You don’t have to sing R&B, Jazz, or the Blues to have soul.  And you don’t have to be a person of color either.  Soul transcends culture, race, gender, and genre.  Lisa Stansfield is an example of that.  Inspired by the sounds of Motown and her musical idol Barry White, Stansfield has a sound that’s steeped in the old school R&B/Soul music of the 60s and 70s, but has a feel good, contemporary flair.  After 20+ years and over 20 million in album sales, Stansfield has amassed a loyal legion of fans with her sexy, rich, velvety, passionate voice.
Stansfield’s breakthrough single “All Around The World” from her debut album Affection (1990) was an otherworldly, massive hit that became an instant classic.  The song is an infectious, pleading confession and listeners, some of which I’m sure could relate, fell instantly in love with it and with Stansfield.  From her debut solo album to 2004’s The Moment, Stansfield’s music has remained a consistent vehicle for her voice.  While she experimented with elements of Pop, Hip-Hop, Dance/House, 2-Step/Garage over the years, her music never strayed too far from the soulful, jazzy lush style she’s most loved for.

Regardless of the style or genre, there’s a heartfelt sincerity in her music.  Her songwriting showcases a knack for storytelling and an innate ability to get inside the lyrics and emote experiences that are endearing and relatable to the audience.  Songs indicative of this are “Suzanne,” “Change,” “Easier,” “Didn’t I,” “Real Love,” and her classic anthem “All Woman.”  With her commendable remakes of Phyllis Hyman’s “You Know How To Love Me” and Barry White’s “Never Never Gonna Give You Up,” Stansfield respectfully paid homage to two of her obvious musical influences while still putting her own stylistic stamp on them.

Aside from being a singer and songwriter, Stansfield is also an actress.  She’s appeared in 5 films, Swing (1999), Goldplated(2006), Marple: Ordeal By Innocence (2007), Röllin Sydän (2007), and The Edge of Love (2008).  Rumor has it she’s ready to begin work on a new studio album.  It’s been 8 years since the release of her last album (The Moment).  According to an article on the Singers Room site, she turned downed a number of offers to star in reality TV shows to instead focus energies on her return to the music scene.  Whenever that day comes, it will be a welcomed return from this stylish, striking beauty with the captivating voice.