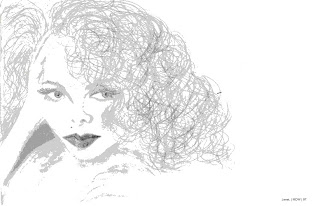 I’m finally sharing some of my artwork online. And what better way to start by showing a picture of Janet Jackson that drew almost 12 years ago. She’s one of my favorite people to draw. And it’s more than obvious at this point that she’s one of my all-time favorite entertainers. Growing up, I was inspired by and adored her music, style, and presence. I must say though, I miss seeing her on the scene.

It seems like Discipline was released so long ago – though it was only last February. It debuted at No. 1, “Feedback” became her first top 20 pop hit since 2001’s “Someone to Call My Lover,” and then like that—it was all over. Yeah, there was the tour (the show was EXCELLENT!!), but you know what happened with that…. Aside from the Superbowl Incident (I still say she was blacklisted in lieu of this), issues in the Jackson family (not going there), and record labels who have no idea how to promote her (anymore)—her musical career seems to be at a crossroads.

She’s accomplished more in the last 27 years than most artists will in their entire careers. She’s done it all. She set the tone. And you can see that with many of today’s hottest female entertainers. The influence is unmistakable. But her music just hasn’t “hit” the way it used to. I don’t think it’s because the music is bad. Have their been some sub par moments over the course of the last three albums? Yes. But lackluster production, poor marketing, no radio airplay, and minimal label support have all played major roles in the downward spiral of Janet’s musical career.

Now, the lady is BAD!!! Always will be. She can grace the stage—not say, sing, or do a thing—and the audience will go wild. Nothing can take away her talent or the history she’s made. But it’s time to hit ’em hard. Hit ’em with something they’d least expect. Or go back with Jimmy Jam & Terry Lewis. The chemistry they have in the studio is magical. And last I heard, they were talking of going into the studio to work on the next album. Great news if it comes into fruition. Cause one thing’s for sure—I won’t be unhappy if JD isn’t producing on the next album. No offense—I love his work. But it’s just not for Janet. It may work for Mariah and Usher (to name a few)—but not for Janet.

All the greats have periods where they hit that brick wall or their music slumps. And most usually return to the top spot better than ever. It’s usually when everyone has counted them out—at the least expected moment—when their prominence is solidified again. Whatever happens—Janet’s got my support. I’ll be rocking with Janet for life!

Just some things that have been running through my mind.

And finally, have a very happy new year! May the year ahead be everything you want and more.