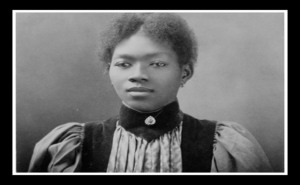 Author and Spiritualist lecturer, Harriet E. Wilson was the first African American to publish a novel in North America. Her autobiographical novel, Our Nig: Sketches From The Life Of A Free Black, was published in 1859.

Happy Women’s History Month!  During the month of March, we honor all women who’ve made (or are making) significant contributions not only to the fabric of our society but also to the world.

During Women’s History Month, we reflect on the extraordinary accomplishments of women and honor their role in shaping the course of our Nation’s history.  Today, women have reached heights their mothers and grandmothers might only have imagined.  Women now comprise nearly half of our workforce and the majority of students in our colleges and universities.  They scale the skies as astronauts, expand our economy as entrepreneurs and business leaders, and serve our country at the highest levels of government and our Armed Forces.  In honor of the pioneering women who came before us, and in recognition of those who will come after us, this month, we recommit to erasing the remaining inequities facing women in our day. ~ President Barack Obama, Presidential Proclamation – Women’s History Month, 2011

So let’s take a moment to honor the women past and present who have made tremendous strides for all of us, not just during the month of March, but every day.