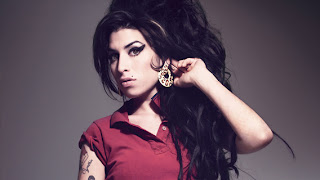 Image courtesy of The Vigilant Citizen site.
Divided soul,
An artist that many didn’t know or understand completely well.
Timeless voice,
A style and sound that was every bit throwback as it was contemporary.
Her music spoke with a raw, brutal honesty seldom seen in mainstream (as of late).
The draw, the connection was instant.
The impact indelible —
Soul and emotion lacking pretense,
And an aura that was intriguing and intense.
Didn’t think they made singers like this anymore —
But they still do.

But you’re gone now.
Another talented soul gone before the world knew or appreciated just how talented you

were.
Family, friends, and fans watched the meteoric rise,
And the seemingly meteoric descent.
We watched as the media reported
And blasted your issues every chance they got —
Dragging you down further and further into the muck.
Yours was an experience many did not and may never comprehend.
You were taken for granted,
disrespected.
While the coverage may come with the territory because of the industry,
The lack of compassion was inexcusable.
We took you for granted,
And in your untimely demise the coverage has changed.
You’re being celebrated for your artistry,
For ushering in the retro-soul era,
For using music as a canvas you painted openly and frankly with your life.
You didn’t allow your art to be subjected to the machine or the man.
You did it authentically.

It’s sad that you’ve gone on.
It’s a shame the world won’t get the opportunity to see just how truly gifted you were

—
To lay to rest the rhetoric that the magic was gone.
It never left.
And you knew that.
Your true supporters knew that.
And we were holding our breath —
Just to see how you’d blow our minds the next time.
But the Creator had different plans.

In your passing, there’s a void that will never be filled.
But your light will always shine

—
In the hearts, minds, and souls of those who loved, appreciated, respected, and were
inspired by you.
We are thankful we had you for the time we did.

Let us rejoice in the extraordinary iconoclast that was/is AmyWinehouse!