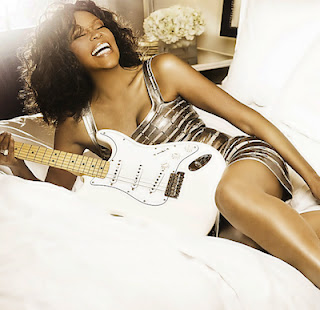 Image courtesy of the Vibe Vixen site.
There isn’t a day that goes by when Whitney Houston does not pop into my mind.  Her music plays in my head daily.  The impact of her passing hit me greater than I ever would’ve expected.  But how could it not?  No, we weren’t related.  She wasn’t a close friend or even an acquaintance of mine.  However, there was a familiarity about her spirit and relatability to her music that made me connect with her instantly. I grew up listening to and loving Whitney Houston.  Since the age of 4, I was hooked.  A singer and music lover even then, she influenced me in ways I wouldn’t come to understand, respect, and truly appreciate until much later.
Houston was a goddess.  Her captivating, larger-than-life voice—pitch perfect, smooth, pure, passionate, and powerful—was the voice of a generation.  I, probably like others, couldn’t get enough.  While studio versions of her songs were pristine, the live versions tended to be paramount.  Practically overnight, she became an awe-inspiring, unstoppable force within the industry.  She broke down barriers and broke records.  She gave hope to so many that they too could achieve their dreams—not only within the entertainment industry but within any industry.  When Houston died, it became all too clear that an era had ended.  While her music and spirit remain with all of us, physically we will never be graced with her presence again.
I’ll never forget the day the news hit.  My spouse and I had just gotten back in the house from hanging out with some friends.  We were planning to go out with another friend later that evening for dinner.  Just before we left the house, we started receiving text messages and phone calls that Whitney Houston has passed.  I didn’t believe it.  I refused to believe it.  So I turned on CNN.  Within moments the news was confirmed.  I broke down.  Almost couldn’t contain myself.  I’m glad my spouse was there to console me.  It truly felt like a portion of my childhood and young adulthood had died with her.  After Etta James’ and Don Cornelius’ passing just weeks prior, Houston’s death seemed to hit home in a very extreme way.
While some could say that Houston’s death was inevitable given her history of drug use, I don’t think anyone can say that they expected her to go so soon.  I have no intentions of pontificating on her drug use, as I believe the focus on this, her marriage to Bobby Brown, and the latter years of her life have been used to paint a very negative picture of her.  She was human.  She made mistakes, had issues, and went through trials and tribulations just like all of us.  Unless we lived within her, it will be difficult for us to truly know, understand, or be empathetic to what she went through, what she had to sacrifice, and why she did the things she did.  But it’s clear—she did what divine power set out for her to do, and she did it well.  She believed in herself and her talent.  She gave everything her all (and then some).  She relied on her faith in god and the love of her family and friends throughout her life.   And she never forgot where she came from.
When remembering Whitney, it’s important that we do not let the negative portrayals of her life cloud the beauty of what she gave to the world.  Her legacy is what should be the focal point.  She inspired an entire generation of singers/entertainers and will inspire several generations more to come.  Had it not been for Houston’s many accomplishments, it’s quite possible that the careers of many of today’s beloved stars would be in a completely different place.  She brought joy and light into so many people’s lives.  Let’s celebrate her for that.  I’ve got nothing but love for Whitney Houston.  And I’m sure many of you do, too.