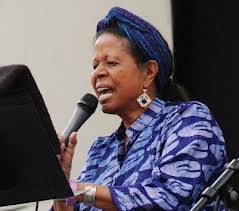 Jazz isn’t just one type of music, it’s an umbrella that covers the history of black people from African drumming to field hollers and the blues… In the sense that I also try to reflect the fullness of the black experience, I’m very much a jazz poet. ~ Jayne Cortez, 1997, The Weekly Journal

On December 28, 2012, the world lost Jayne Cortez, a masterful, fiery poet, performer, and activist.  Ms. Cortez, who’s often referred to as an Avant-Garde or Jazz poet, came to prominence during the Black Arts Movement of the 1960s and 1970s.  Her work is visceral, varied and rich, pulling from jazz, blues, the written tradition,  the African/African-American oral tradition, jazz, blues, and the colloquy of social and political protest.  “Meant for the ear even more than for the eye, her words combine a hurtling immediacy with an incantatory orality,” Margalit Fox of The New York Times said when describing her work.

Collectively, she produced nearly two dozen volumes of poetry and recordings, many of which were recorded with her band the Firespitters.  Some of her volumes of poetry include: Scarifications (1973),  Firespitter (1982), Poetic Magnetic: Poems from Everywhere Drums & Maintain Control (1991), and The Beautiful Book (2007); some of her recordings include: Unsubmissive Blues (1979), There It Is (1982),  Taking the Blues Back Home (1994) and Find Your Own Voice: Poetry and Music, 1982-2003 (2004). She founded the Watts Repertory Theater Company, Bola Press, and co-founded the Organization of Women Writers of Africa (OWWA).  Ms. Cortez was the recipient of the American Book Award, Langston Hughes Award, and International African Festival Award (amongst others).

Though Jayne Cortez is no longer with us, her authentic style and voice will continue to incite, inspire, teach, and uplift for many generations to come.

To learn more about Jayne Cortez, please go to her official website and check out her passionate, intense performance from the “Artists On The Cutting Edge” Series in the video below. (Warning:  The beginning of the video contains flashing elements.)