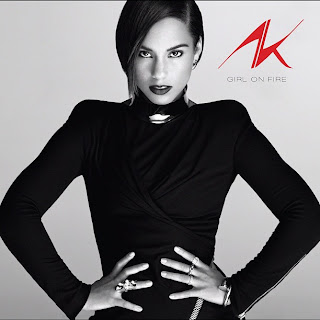 I have arrived at a place in myself that I am comfortable being exactly who I am in this moment and sharing it with no reservations. ~ Alicia Keys (2012)

The wait for the the next Alicia Keys album is almost over.  After nearly three years since the release of her last studio album, The Element of Freedom.  Keys announced that she was working on her fifth studio album entitled, Girl On Fire.  This week, Keys unveiled the artwork for the album.  And the results are simply stunning.  The cover features Keys with an expression and pose that exudes power, confidence, sass, attitude, edginess, fierceness, and sexiness.  It’s Keys like you’ve never seen her before.
The cover also implies that we’re going to hear Keys like we’ve never heard her before.  While her music has always come from a place that’s personal and introspective, Girl On Fire seemingly looks to take her music several steps deeper.  Immediately, I sense this album will be a snapshot of the evolution of Keys—the woman and the artist.
According to a recent post on her website, she has freed herself from the things that were holding her back.  Keys says,

Girl on Fire is about new beginnings, new perspectives and fresh starts… stripping away all the bad energy in your life and taking full control of the reigns and how you want to live. There is something really empowering about finding yourself and your own inner strength.

Essentially, Girl On Fire aims to be the embodiment of Keys’ strength, fearlessness, braveness, and freedom.  It’s honest, soulful music.  It’s the type of music that tends to be quite substantial and resonates deeply with the audience.  I have high hopes that Girl On Fire will be exactly just that.
Girl On Fire will be released 11/27/2012.